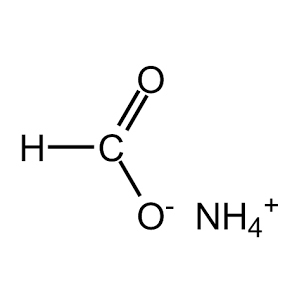 Offered Ammonium Formate is formic corrosive’s ammonium salt. It is a vapid, hygroscopic, crystalline solid. Pure formate decays into formamide and water when warmed, and this is its essential use in industry. Formic corrosive can likewise be acquired by responding ammonium formate with a weaken corrosive, and since provided Ammonium Formate is additionally delivered from formic corrosive, it can fill in as a method for putting away formic corrosive. This can likewise be utilized as a part of palladium on carbon (Pd/C) diminishment of practical gatherings. Within the sight of Pd/C, it to hydrogen, carbon dioxide, and alkali.

Niranjan Laboratory produces and supplies lab and industrial chemicals to Indian and international markets, like Italy, South Korea, Canada, Japan, US, France, Brazil, UK, Australia, and Thailand. Ammonium formate in our offering is an ammonium salt of formic acid. This is basically crystalline and colorless solid which when heated decomposes into water and formamide.

It finds use in many industrial sectors. Ammonium formate can be reacted with a dilute acid to obtain formic acid. This chemical is also produced from formic acid and often called ammonium salt of formic acid. Reductive amination of ketones and aminatiom is another use of NH4HCO2. It also acts as a buffer in HPLC. It can also be used with liquid chromatography / mass spectrometry.

Ammonium formate eliminates water and forms formamide upon heating. When further heated, it forms to HCN and H2O.